An energetic, cheery B-Shot who belongs to the East Block.

His B-Daman is the rapid-fire type Lightning Fin.

Since he has lived abroad, he has a straightforward and open personality.

He enjoys entertaining the spectators with flashy, “charming plays,” like his impressive one-handed rapid-fire.

Kaito is an eleven year old boy with blonde hair and forest green eyes. On his head he wears a red and blue beanie and has his head spiked downwards. His eyebrows are a spikey black and has a small bandade on his right cheek. He wears a beaten up striped shirt colored white and gray under a green jacket with a red stripe on the right arm. He wears blue pants that are rolled up to under his knees. He also weras blue and white normal shoes.

Wait a Minute! He's the Champion!?

Kaito debuts in B-Daman Crossfire arriving late as the eighth contestant. He would first be ridiculed by the Cross Fight Commistioner and his peers but it did not seem to phase him but instead encourage him to battle better. Kaito equips his gear and uses reckless rapid fire and his super shot to win the 3rd place slot in Enchanted Long Bridge. 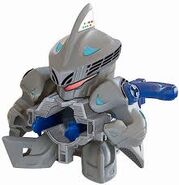 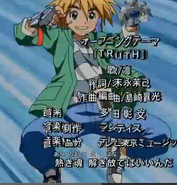 Kaito in the Opening. 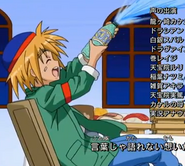 Kaito in the Ending. 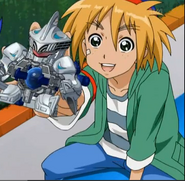