Kamon Day (Japanese: Kamon Godai 御代 カモン Godai Kamon) is the main character of B-Daman Fireblast and the Southern B-Master of Crestland. His B-Daman is Drive Garuburn. He is the younger brother of Aona and Roma Day, as well as Greg and Himiko Day's youngest son. He also works at his older sister's restaurant as a delivery boy and waiter.

The eleven year old Kamon has red hair and orange-red eyes. He wears a white scarf over his dark gray shirt that has rolled up sleeves which has another blue shirt under that is partially shown in a triangle-shaped fashion. He has red pants which appear to be skinny and wears gray boots. It was revealed that Kamon inherited the scarf from his older brother.

Kamon is hot-blooded, impatient, outgoing, and eager to play B-Daman, and somewhat scatterbrained. He is also fiercely competitive, with a never-give-up attitude, and a good heart. When he was the B-Master of Southern Crestland, he treated every B-Shot in his area with respect and kindness.

When backed into a corner during a challenge, and the odds are heavily against him to a drastic extreme, Kamon goes into a terrifying berserker-like state, in which his inner darkness is brought out, manifesting as an aura of black fire, along with the sclerae of his eyes turning black. In this state, his personality becomes filled with darkness, and negative emotions, such as anger, strife, frustration, arrogance, etc. For reasons unknown, his older brother, Roma, seems to be the driving force behind this state. It is brought to its peak in The Blue Showdown! Garuburn VS Dracyan, where the Grand B-Master himself restores his memories and forces him and Garuburn to unleash their inner darkness against their will, as a means to corrupt them. In this state, Roma manipulated him like a puppeteer to his marionette. It was later revealed that this state is a result of the Kirin B-Daman, Triple Gillusion, using his negative emotions to control him.

It was revealed by Greg Day in episode 06, To Be The Best! Cross Fight! that he was once the Southern B-Master of Crestland. When his older brother, Roma Day, the Grand B-Master of Crestland, established the Road Fight, Kamon witnessed the unrest among losing B-Shots, due to the "Bad Law", as it is called, that B-Shots that lose in the challenges must do what their opponents say, and those who ignore it are punished. He challenged his brother over it, wanting to change the law of the Road Fight for the better, but was defeated. He lost his Drive Garuburn's B-Animal and the memories of his days as a B-Shot and his family, except for those of his older sister, Aona Day.

Kamon appeared briefly during the finale of B-Daman Crossfire, as the B-Animals were being restored to the world's B-Daman. He appeared in Crestland and held a smirk before exclaiming "Time to heat things up!" for the few seconds he appeared in.

In I'm Getting Fired Up! Drive=Garuburn!, Kamon was shown to have "dreams" of using Garuburn to fight against an unknown darkness. He later fell out of his bed and awoke to find his sister, Aona, standing at the door reminding him that they were going to the market that day.

Later on at the market, Kamon showed an interest in B-Daman. Aona picked up on this, but disregarded it. However, later on, Kamon delivered an order to B-Junk, a newly-established local B-Daman Club. The owner, Greg, was pleased with this and let Kamon construct his own B-Daman to keep. A mysterious feeling overcame Kamon and he unknowingly re-created Drive Garuburn. Garuburn's B-Animal entered the B-Daman and the two conversed about the "dream"; both had shared the same one, and felt like they were destined partners. Kamon mastered Garuburn's Emblem Charge Shot, Burning Overdrive, and quickly had to leave to go home. Greg mentioned how much his son had developed, despite his loss of memory.

In Vroom Vroom, I'll Sting You! Slot=Beedle!, Kamon learned about Crestland's signature sport; Road Fight. He set a goal with Garuburn to become the #1 B-Shot, and quickly left B-Junk before Greg could explain the consequences of losing. Kamon then participated in a Road Fight with Misuru Hachisuka, the game being a Honeycomb Net Battle. After suffering for most of the battle due to Garuburn's lack of precise shooting, Kamon unleashed Garuburn's Emblem Charge and won the match. Misuru explained to Kamon about the "Law of Road Fight", in which the loser must do one thing that the victor says. Kamon ignores this and tells Misuru to "do as he likes", then walks off.

In I Came Here to Relax! Sonic=Dravise!, Kamon was late returning home to Aona. When Aona learned that Kamon had obtained the Garuburn B-Daman, she confiscated it and hid it in a pot. He soon found it however, and then headed to B-Junk to deliver a new order. Upon reaching there, he found Misuru, who instructed him to have a Road Fight battle with Samuru. He declined the challenge, but as he does so, the cover blows off the nearby table and reveals a DX Break Bomber 7 table, much to everyone's surprise.

In I'm Having Fun! DX Break Bomber 7, Kamon was taught about the sport of Crossfire and the rules of DX Break Bomber 7, alongside Samuru and Misuru. After learning that Samuru is a champion of Crossfire, he decides to challenge him but ultimately loses 7-0. However, he vows to become stronger together with his friends and become a Crossfire champion. 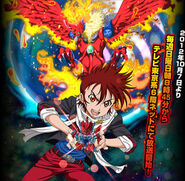 His Sighing is so cute!

Kamon being forcefully corrupted by the Kirin B-Daman

Kamon as a baby

Kamon being consumed by the darkness

Kamon Day in the Opening

Kamon being intimidated with an angler fish