Start a Wiki
Karen is a character appearing in the game series of Battle B-Daman. Her B-Daman is Shinobi Cat.

Karen has long blonde hair. She wears a green jacket with a blue T-shirt inside. She has a reddish scarve around her neck. When she disguises herself as a male, her hair is all tied up and hidden under a hat, and shows a somewhat more serious looking expression. She also wears a red glove.

Karen is the older sister of Pete, who fell under Death's control. Deciding that she should save him, she disguised as a male to go looking for him. She bumps into Yamato at Galetoon, helping him find Bull. Later on, she is found unconscious in the town. Yamato takes her back to the Cat Cafe, where Mie took care of her. After she gained back her consciousness, she went back to look for him.

After the main plot and Pete is saved, she retires from being a B-DaPlayer. 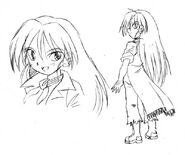 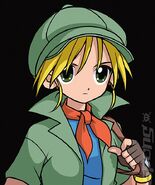 Add a photo to this gallery
Retrieved from "https://bdaman.fandom.com/wiki/Karen?oldid=41115"
Community content is available under CC-BY-SA unless otherwise noted.