Kiba is a character appearing in the anime series, Battle B-Daman: Fire Spirits!. His B-Daman is Go-Tiger

Kiba's design resembles a white tiger, he has a long ponytail that starts from the top of his hair, and hair strands that stands out. His eyebrows are somewhat thick.

Kiba is a childhood friend of Wen and Li. However, they separated when the siblings became B-DaPlayers.

Kiba's first appearance was when he showed up at a deserted town, looking for a strike shot. He immediately battled Wen through Kung Fu, and they made up. Kiba eventually got the Spike Shot from there, and managed to get into the Winner's Tournament. He was out on the second round. Kiba also showed up during Yamato and his team's invasion into B-Deus' Hideout to save Aqulas, and was there through the final battle although he did not participate.

Kiba was part of Team Junk due to the fact that he stole the B-Daman of the people he defeated through the nation to form the current Go Tiger. He mentioned that it was due to the fact that he realized that the Yong Fa siblings joined the Shadow Alliance at that time, and wanted to follow them. As soon as Wen found out, he tried to challenge him, but as Wen was already out of the tournament, Li took his place. Biarce gave permission for Wen and Li to change places later in the battle, and Kiba was forgiven by Wen right at the end of the battle. 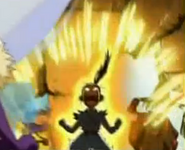 Kiba flaring upon hearing a joke about him.

A dumped design of Kiba.

Kiba and Go-Tiger on the Japanese Intermission Screen

Add a photo to this gallery
Retrieved from "https://bdaman.fandom.com/wiki/Kiba?oldid=41375"
Community content is available under CC-BY-SA unless otherwise noted.