Knight Cavalry (Japanese: ナイトキャバリー, Naito Kyabarii) is a Control/Power-Type B-Daman, and is Cain McDonnell's first B-Daman. It was released in Japan in December 2003 and sold for 680円.

Knight Cavalry is a Zero System B-Daman with knight-like armor. Knight Cavalry is decorated with blue and white symbols on it's head, shoulders, barrel, wings and feet. Its unique control device is the Knight Wing on its back, and can be adjusted to allow the B-Daman to fire powered shots. It also has a trigger extension, to make it easier to fire.

Sonokong Super Size packaging.
Add a photo to this gallery 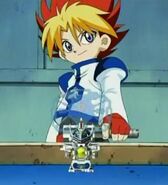 Destroyed by Black Knight.
Add a photo to this gallery
Retrieved from "https://bdaman.fandom.com/wiki/Knight_Cavalry?oldid=48880"
Community content is available under CC-BY-SA unless otherwise noted.