Konta is a short 10 year old boy with blonde hair and brown eyes. He has brown highlights in his hair to symbolize his fox appearance. He wears a long sleeve white shirt with a scarf like collar. Over the white shirt, he wears a short sleeve blue and yellow vest. He wears gray shorts and white shoes with blue and yellow striped socks. He also has a blue backpack with a fox tail, that pops out his crash system B-Daman when he pulls the tail, attached to it symbolizing his fox look.

Konta is a very calm but yet fun loving boy who can become very serious. He is a B-Daman Hunter but he will not steal them but instead beat his opponent with honor after challenging them for it. Because though he is young and male he still has his fears, being very lazy he hates work and refuses to do labor. He also has a certain awkwardness around girls, even his sisters who he is afraid of because they make him do things for them.

Konta debuts in Crash B-Daman when Hitto and Nana go to the B-Center, Konta helps Hitto properly prepare his Magnum Ifrit in Crash Mode. After Hitto loses Konta helps him train to fire more powerful shots. Konta next appears when he helps Hitto get a little girls plush bunny back. Afterwards he tell Hitto to visit Mr. Uika to fully equip his Magnum Ifrit. Hitto and Konta then decide to crash the Black Horse rally because of Masawa's invitation. They end up facing the team leader Konkura and Sugei who eliminate Konta due to Hitto's incompetence. With the help of Kodoh Hitto is able to defeat Sugei and Konkura. 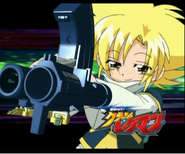 Konta with Blitz Garuda in the intermission screen