Kreis Raydra (Japanese: クライス=レイドラ, Kuraisu=Reidora, Kreis=Raydra) is a Control Type B-Daman in the Emblem Charge System, featured in B-Daman Fireblast. It is used by Bakuga Shira, the B-Master of Western Crest Land.

Unlike with Strike Tigare, Raydra's Head Part has a pair of anime-eyes on its mouth-visor, in addition to a translucent red piece above the marble loading area with a cross-hair in it. On top of the tiger face, is a sight-ring, which can be swiveled forward to cover the visor for the mode change into Sniper Mode, to add to the cross-hair for a complete targeting sight. In addition, the top of the Head Part of Strike Tigare can be placed on Raydra's for the Super Fusion into Perfect Kreis Raydra (see Super Fusion: Perfect Kreis Raydra below)

The B-Daman's Emblem Parts are designed like handles, with their motif being that of the White Tiger of the West, similar to how Drive Garuburn's Emblems represent the Vermillion Bird of the South. When you use your fingers to barricade them to the point of them being unable to go forward anymore for an Emblem Charge shot, the B-Daman's firing strength increases. If you don't want to end up breaking the Emblems, swivel back the claws on the B-Daman's Arm Parts to block the Emblems from moving forward.

Similar to Round=Tigare, Kreis Raydra has gold-colored Stud Parts, but with a brighter shade of gold.

Raydra's Arm Parts have detailed hands, complimented by a pair of tiger claws that can be swiveled either to cover the hands or block the Emblem Parts.

In addition to a pair of pegs in the back for inserting Strike Tigare's Arm Parts for the Super Fusion into Perfect Raydra, this Leg Part has a pair of claw-like stabilizers on its feet, which can be pulled for the change into Sniper Mode, to cover more surface area to enhance forward stability.

This Core Part has four pegs at its front, and in its firing mechanism is a piece that makes sure that any marble fired from it stays in a straight path, no matter how much the trigger wobbles when you press it. Plus, the upper pegs can have the eyes of Strike Tigare's Head Part attached to them, for the Super Fusion into Perfect Raydra.

This Super Fusion only works if Kreis Raydra is in Sniper Mode. You take the Arm Parts of Strike Tigare and attach them to the rear pegs of Raydra's Leg Part, while putting the sides of Tigare's face onto the front end of the Kreis Core, and putting the Tigare Sight on top of Raydra's head, to add more of a sight. 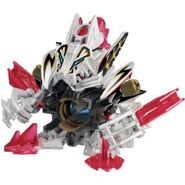 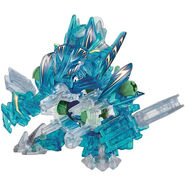 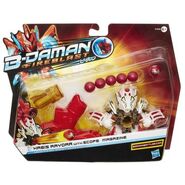 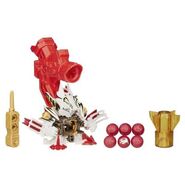 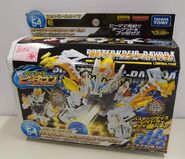 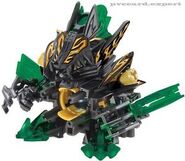