Legend Blaster (Japanese: レジェンドブラスター, Rejendo Burasutā) is a Power Type Cartridge System B-Daman. It is a special red variation of Cobalt Blaster with fire strip decals. It can be completed by collecting and building with its individual parts. A complete single packaging release of Legend Blaster was released as a limited, 1000 unit item at Lottery CoroCoroComic events.

As contrasted to Cobalt Blaster, Legend Blaster has a limited red re-color of the Blaster Sight. The Limited sticker sheet contains fire strips and the head plate and visor pieces are purple instead of blue.

The Hold Power Arms feature red, ring-like Cartridge holders used for manually holding said Cartridge when not in use. They can be folded off to the side as another means of storage. Alongside this however, is the unique feature of these Arms. Similar to Helio Breaker from the Zero System, when these Arms are placed on the figure they press and push against the Hold Parts of the Cartridge Body to give an increase in strength. In the case of Legend Blaster, it has fire strip stickers.

In the toyline, an alternative way is obtain it occasionally is via Cobalt Blaster Limited Full Cartridge Ver. (WHF release) and the Cartridge System Challenge Corner.

In the anime, the Legend Drive Shot appears with a shiny rainbow effect. It can unleash a huge burst of flame and has great healing power. Yamato obtained the Legend Drive Shot from Aqulas during the final battle against Geldezar. Aqulas sacrificed his life to make another strike shot, even though Shin forbade him to, because it will take his own life, due to the loss of energy from creating the Stealth Drive Shot and Gadium Shot. This is the only way Yamato could fight against Geldezar's Gadium Shot. Its great power could not be handled by Yamato's Cobalt Blaster, but it is compatible with and usable in Cobalt Blaster Drive Cannon

When fired, the Legend Drive Shot appears with small trail of fire but after a second, it ignites into a huge burst of flames that could take its enemies burning to the sun.

How To Build Legend Blaster 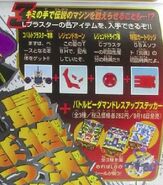 Guides How to build Legend Blaster

Legend Blaster in the manga

Retrieved from "https://bdaman.fandom.com/wiki/Legend_Blaster?oldid=48729"
Community content is available under CC-BY-SA unless otherwise noted.