As the B-Daman's name suggests, it is designed to look like a crocodile, with its red eye designs and complicated purple and yellow patterns towards the sides of the Head Part, along with a green visor in the crocodile's open mouth. There are also three ridges along its snout, for players to rest their fingers on when holding the B-Daman. This Head Part is considerably long when compared with other ones.

The Arm Parts have hexagonal shoulders with spikes protruding towards the back. The fact that the whole Arm Parts are molded with small diamond-like spikes allude to resembling the scales of a crocodile. There are also yellow stripes meant to indicate the division of fingers on a crocodile's front legs.

Loading=Diles has its Leg Parts with purple and yellow designs towards its sides and spikes across the top. Like the Arm Parts, there are yellow stripes to indicate the division of claws. Due to the design of the Loading Core, these legs are actually attached much more forward than one would normally expect on a core.

In addition to two Hold Parts, this Core Part has a gimmick where the user can load marbles from the bottom, using a special slot. Due to the way the Loading Core is designed, the Leg Part is mounted in front of that slot.

Lightning Diles first appears in Episode 22 under Alba's ownership when Sumi shows the WBMA a video about Diles' B-Animal saving a group of tourists from a floating log. In this video, Alba is shown as a silhouette using Diles while wearing the crocodile mask he usually wears on his shoulder. The WBMA does not remember registering an alligator B-Animal in their database, so Samuru's father quickly deduces that Diles was actually a B-Daman from ancient times.

When Riki and his friends enter the cavern hidden in the mountain within South Town, they are confronted by Alba and Diles, whose strength without any Tune-Up Gear can move the door guarding the ancient ruins. As Riki and his friends progress within the mountains, Alba explains that Lightning Diles is actually a modernized version of the one of the original B-Daman from ancient times, and that his B-Animal allows him to speak as well. 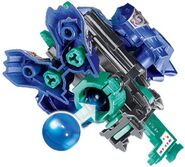 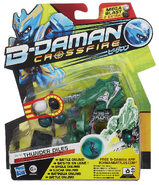