Not to be confused with the B-Daman featured in the B-Daman Crossfire anime: Lightning Dracyan

Lightning Dracyan is a Rapid-Fire Type B-Daman released under B-Daman Crossfire. It uses the Core Change System and was released on November 2013 internationally.

The Dracyan Head is the part which names the B-Daman's motif and connects to the Core. It takes a dragon theme into a helmet's appearance with its three horns: two ear-like ones forming a crest and a thin, centered horn slightly curved. Due to this, one's finger can rest on it for a firmer hold but it also doubles as a minimal Sight. The piece is also designed with two eye sockets beside the horned crest representing the dragon's eyes. Anime-esque red eye stickers also appear with a lime-green mouthplate of sorts. Bright yellow and orange stickers designed with some circles are meant to be used on the crest.

The Dracyan Arms are one of the most basic Arm Parts; they connect to the Core's sides and usually provide grip. It consists of curving shoulder pads and bent arms locking in fists. Since they have a downward curve, they offer a comfortable hold for the player even if they are basic parts. Yellow stickers with red curves and circles can be applied as well.

The Stud Parts are these screw-like pieces that connect the Arms and Legs to the B-Daman's Core so as they do not become loose. Lightning Dracyan uses bright yellow ones.

As a Leg Part, this connects at the bottom of the Core and gives stability. The Dracyan Leg is rather basic, appearing as two stubby feet seemingly designed with armor. They use bright yellow stickers.

Oneside features the Oneside Grip, a part resembling a pair of handle bars that connects to two square-like holes to be used exclusively with Oneside. Once connected, it rests atop a normal Trigger with a relatively fast spring. The grip is supposed to make firing with one hand possible so the user's other hand can reload and gather more marbles or stabilize the figure. While it does function that way, the grip will eventually turn loose and fall off which makes the gimmick generally useless. It also has two Hold Parts ending in two tips shaped like shark heads like Lightning Fin. It is best executed with the Straight Magazine however. 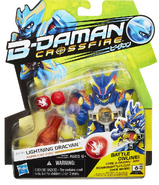