Lightning Kahn (Japanese: ブラッディカイザー, Buraddi Kaizaa, Bloody Kaiser) is a Power-Type Zero System B-Daman owned by Enjyu and the 'brother' of Cobalt Blade. It is also the successor to the DHB System B-Daman, Cobalt Geist and Shred Kaiser. It was first released in Japan in October 2003, for 680円.

The Kahn Visor consists of a dark orange visor complimenting a Helmet with three prominent protrusions, each one having a rubber fin on the back.

Each piece of Shoulder Armor has a rubber wing to allow the user to hold the B-Daman better. On the front of the left shoulder is an angry-eye with a blue iris and red sclera, with three scratch marks. Printed on the other Shoulder, but in the Japanese version, is "Shadow", whichso happens to be the Shadow Alliance's name in the Japanese version of the anime and manga.

NOTE: For Hasbro's release of this B-Daman, they used a softer rubber.

The Kahn Foot pieces each feature a single triangular claw for forward stability.

The purpose of this component is to squeeze in the Hold Parts from the sides, increasing the B-Daman's power, similar in concept to Helio Breaker's Power Arms.

The irremovable Core is black with red Basic Hold Parts and Basic Trigger.

The Power Buckle is brittle and can be broken with repetitive use or strained easily with force.

When Enjyu joined the Shadow Alliance, Ababa took him to Armada's workshop, where he claimed Cobalt Kahn, which he renamed Lightning Kahn. When all this was revealed in the anime, Enjyu says that he had installed several upgrades to Lightning Kahn, making it practically unbeatable. 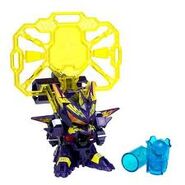