The Limited series are a set of repackaged versions of six Over Shell System B-Daman toys from the mid-1990s Super B-Daman series, released in Japan in December of 2002 for Battle B-Daman, months after the release of the DHB System B-Daman toys. They each sold for 500円.

Due to being repackaging of Over Shell System B-Daman toys, they have compatibility with the O.S. Gear and O.S. Parts. Because of their general rarity nowadays, they best kept as collector's items. 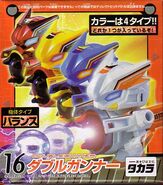 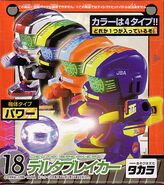 Promotional image
Add a photo to this gallery

Retrieved from "https://bdaman.fandom.com/wiki/Limited_series?oldid=48823"
Community content is available under CC-BY-SA unless otherwise noted.