Mach Garuda (Japanese: マッハガルーダ, Mahha Garūda) is a Rapid Fire Type Synchro Weapon System B-Daman belonging to Konta Tsukino as his second B-Daman, in the Crash B-Daman anime. It was released in Japan on July 20th, 2006, and sold for 945円.

Garuda 2 features a redesigned helm, with a black coloration. The helm also has four small green trapezoid shapes, two on either side, along with two large red designs at the front giving the effect of eyes. It also has new shoulder guards, similar in design to the previous ones, but with new protrusions on them, and a black coloration. Its defining feature is its Triple Roller Hold Parts, featuring a set of three rollers in a Delta-like formation, similar to the Delta Roller Core from the Battle B-Daman toyline.

Similar in length to the .67 Compact Barrel, the new .67 Roller Barrel features a pair of rollers to help smooth out fired shots.

Thunder is a Synchro Grip featuring a straight-style handle that extends to the rear, resembling a handgun's grip handle with a high-capacity magazine jutting out of it. Its sub-trigger features a wide pad to ease the firing of Synchro Weapons. 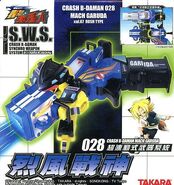 Retrieved from "https://bdaman.fandom.com/wiki/Mach_Garuda?oldid=47415"
Community content is available under CC-BY-SA unless otherwise noted.