Mach Scorpio (Japanese: マッハ=サソード, Mahha=Sasoodo, Mach=Sasword) is a Rapid Fire-Type B-Daman in the Emblem Charge System. Its Body Set was released in Body Random Booster Vol. 2, and its Core and POM Rollers in the Garuburn DX Version-Up Set 2, both on February 23, 2013. It was upgraded from Lightning Scorpio, and is used by Simon Sumiya.

The Head Part features the adjustable "Sasword Needle" to help with one-handed holding.

Unlike with most B-Daman in the Emblem Charge System, Mach Scorpio has one Emblem instead of the usual two, and it can be mounted on either Arm Part similar to Dashing Tankshell.

This B-Daman has baby-blue Stud Parts.

Mach Scorpio's Arm Parts feature three, adjustable, removable pieces that can be used to convert either arm into a "Protect Arm", which would allow the user to hold the B-Daman with one hand on either side, depending on what arm the pieces are positioned on.

Mach Scorpio's Leg Part is similar in concept to that of Lightning Dravise, but with the rollers for moving forward and backwards. A separate version of the rollers, made of polyoxymethylene (POM), can be acquired in the Garuburn DX Version-Up Set 2.

The Mach Core is a redesign of the Roll Core from the original Lightning Scorpio. It features rollers on its ring-type trigger extension, and a small roller-based guide, for smoother, more controllable rapid-firing. The front tips of its Hold Parts are also designed like a scorpion's pincers.

The rollers can move back and forth

The positions of the Sasword Needle

...Can be adjusted however the user wants!

The Emblem can be put on either arm!

Mach Scorpio and its predecessor, Roll=Sasword

Mach Scorpio's debut in the anime 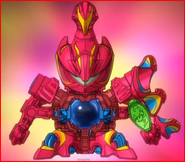 The trigger of the Mach Core 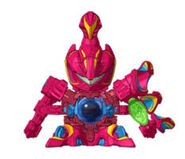