Mamoru is a blue-eyed and blonde-haired boy with a rather short stature. He wears a white short-sleeved shirt and a sleeveless cotton vest over it. He also wears dark-colored pants and sneakers of the same color.

Mamoru's most distinguishing feature is his blonde bowl-cut hair with an ahoge in the shape of an apple's stem.

Mamoru is a gentle-hearted boy whose constantly worried with Hitto Tamaga's recklessness.

Mamoru Matoba is Hitto's childhood friend who appears in the manga in place of the anime exclusive cousin named Nana Sendo.

Mamoru appears in the very first chapter, helping to catch the magpie that stole a wedding ring from a local lady. Mamoru was shocked when Hitto lunged to capture the magpie which eventually resulted in the latter falling down from several feet in the air. Mamoru helps Hitto return the ring to the lady.

Later on the Chapter, Mamoru and Hitto find themselves dragged into a gang war with the members of the local gang called the BLOODIES. Mamoru, not being accustomed to any daredevil stuff, is quickly beaten up by the BLOODIES gang members. Mamoru felt helpless for the rest of the duration of the battle and his weakened state is what caused Hitto to rage against their aggressors.

Mamoru has no B-Daman of his own and thus he fought no actual B-Daman battles. However, Mamoru found himself accidentally dragged in the gang war between the BLOODIES and Hitto in the first chapter. 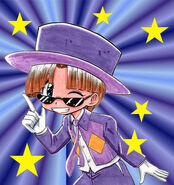 2015 Birthday Pic
Add a photo to this gallery

Retrieved from "https://bdaman.fandom.com/wiki/Mamoru_Matoba?oldid=41790"
Community content is available under CC-BY-SA unless otherwise noted.