☀(Note: The statistics of this B-Daman are based on the game Battle B-Daman Fire Spirits GBA game)

Mega Diabros has a grayish-colored skeleton, not unlike Break Ogre's.

The Mega Head is a gray head with three red fins, two of which on the sides resembling devil wings, and a smaller central one on top of the head. Mega Head also features a green visor, along with two smaller green strips and red designs above it.

The Mega Shoulders are broad and gray, similar in design of Chrome Raven's Chrome Shoulders, but with reddish-colored designs, along with a pair of foldable red wings that only serve aesthetic purposes.

The Mega Gauntlets are of a red coloration, resembling evil versions of Cobalt Saber's Gun Shields.

The Mega Foot parts are of a gray coloration with red designs. They are compatible with the feet of standard Blaster Core skeletons, as well as the unique feet that are molded specifically for the Motor DHB Core.

Mega Diabros comes with its own set of DHB parts for the Direct Hit Battle game.

Mega Diabros comes with its own special version of the NEO Shield Sight 02, in a semi-translucent lavender color and a more intimidating design, though its purpose remains the same.

The Mega NEO Attack Point 02, though a bit different in appearance than the original, it has the same function.

As with the other two DHB Parts, the Mega DHB Barrel 02 is differently designed than that of the original DHB Core. When the Mega NEO Attack Point 02 is struck, it flips down to prevent the user from firing any more marbles, and shutting off the Motor DHB Core.

As the name suggests, this is a motorized version of the DHB Core, with a firing mechanism consisting of an extremely short trigger that, when pushed, opens a path that lets the B-Dama into a high-speed motorized flywheel that flicks it out through the barrel, firing it. Its power is average at best, but its firing rate can empty even the highest capacity magazine piece in a matter of seconds. It is powered by two AA-size batteries. The packaging advertised that shots fired from this Core are given a forward spin. The Motor DHB Core also features pegs on the sides to which a unique pair of feet are fitted.

Mega Diabros also has three modes for firing, depending on the type of magazine attached to the Motor DHB Core.

This mode can be attained, by not attaching a magazine to the Core.

This mode is achieved when the user attaches the standard DHB Magazine.

When a high-capacity magazine piece, such as the Wide Server for instance, is attached to the Motor DHB Core, the B-Daman is changed into Rush Mode.

Mega Diabros is first seen defeating several B-DaPlayers at a time, working autonomously. It is used to defeat even Sly and Shegen without even using a fraction of its power. Mega Diabros was even the first B-Daman to completely overpower Cobalt Saber and defeat Yamato Delgado. 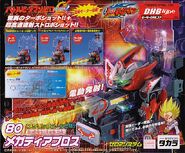 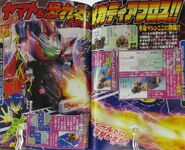 Add a photo to this gallery
Retrieved from "https://bdaman.fandom.com/wiki/Mega_Diabros?oldid=50072"
Community content is available under CC-BY-SA unless otherwise noted.