The Meteor Bomber Battle Set's contents consist of the following.

Instead of the elongated, rectangular field that previous Bombers have used, Meteor Bomber offers a V-shaped one where both B-Der's Shooting Area are at the ends of the two paths. Once there, they will find "goals" at the opposite of their path, which pucks must be hit into to score a point.

The objective of the game is to hit two of the three pucks into your own goal. Once two pucks have been scored into your goal, a flag will spring off of the side, signifying your victory. After the first puck is scored, the mechanism will release a second puck through the gap above the goal. This will not happen when a second goal is scored, as only one extra puck is held. 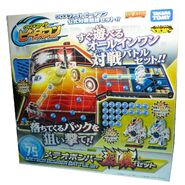 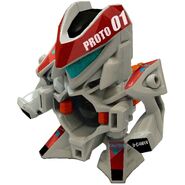 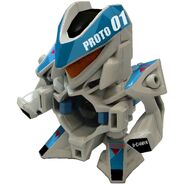