Midnight Blade (Japanese: ステルスブレード,Suterusu Bureedo, Stealth Blade) is a Power-Type Zero System B-Daman, and a variant of Cobalt Blade. The Japanese version was first sold as just the armor in November 2003 for 480円. The Hasbro version also included a red EZ Target pin and a black plastic B-Dama with a red flame symbol printed on it.

As with any B-Daman in the Zero System, Midnight Blade has a standard IBA Body of a black coloration. The Japanese version did not include this.

Although this is a re-coloring of Cobalt Blade's helmet, there is a distinctive difference; the lack of anime eyes in the visor. The flame designs are not present for the Japanese version either; instead, the word "Stealth" in all capital letters is emblazoned upon on the helmet. It also possesses a black-and-red Power Blade, for accuracy. The Hasbro version retained the flame designs but as a solid red with white outlines and white visor sections. The Power Blade on the Hasbro version is also black and white instead.

It is essentially the same as Cobalt Blade's, but with solid red flames with white outlines on the Hasbro version. The Japanese version's pads are solid black.

These are simply Cobalt Blade's Gauntlets in solid black coloration. The Hasbro version features a thin white line and a small white triangle pointing downwards on them. The Japanese version's features a red stripe and white text on them.

A re-color of the Cobalt Foot in black. The Hasbro version features an inner white section, with small black text reading "Battle B-Daman Zero". The Japanese version's feature a red stripe with white text under, reading "Caution", on the inner section of the feet.

As with any B-Daman in the Zero System with the IBA Body, the Core is integrated and non-removable. Not very powerful on its own, but when the Midnight Wing is added, its power increases. Its Hold Parts and Trigger are a solid white. This only came with the Hasbro version but was a recommended addition on the back of the Japanese packaging.

Takara's release of Stealth Blade came in the form as armor accessories only. Hasbro's Midnight Blade came as a complete B-Daman, and comes with different stickers. More specifically, Hasbro's stickers resemble Cobalt Blade's more closely, except with a red hue. In addition the visor is much less detailed compared to Takara's. Hasbro also released a DHB version of Midnight Blade as well.

The prototype Hasbro Midnight Blade appears to share stickers from the original Stealth Blade release as well as Cobalt Blade. Specifically it retains Stealth Blade's horn, visor and foot armor stickers, but the rest is based on Cobalt Blade's. 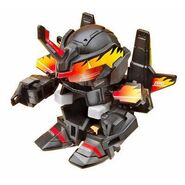 Back of the Japanese packaging. 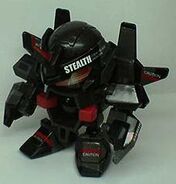 Complete Japanese Stealth Blade.
Add a photo to this gallery
Retrieved from "https://bdaman.fandom.com/wiki/Midnight_Blade?oldid=50038"
Community content is available under CC-BY-SA unless otherwise noted.