Nana is a thirteen year old girl with light ginger hair which is tied into a strange pigtails with a long hair at the right side and short hair at the left side and purple eyes. Nana's basic attire is that of a school girl wearing something that would usually be uses in at a Japanese private school. She wears a puffy white blouse covered with a schoolgirl vest with a red ribbon. She also wears a blue skirt with white leggings. She has brown boots with white straps and her trademark hair beads and wrist compass.

Nana is a very kind girl especially to her cousin Hitto Tamaga. She is usally very enthusiastic about almost everything, especially when she strives to want to become a B-Da Player. Though she is very nice, she has a temper that can go off at any second along with no tolerance method for villains. 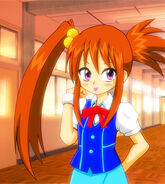