Darami is a tall and shapely woman with black hair, green eyes and a beauty mark. She wears a Chinese style dress and a red pair of high-heeled shoes.

Darami is also known to cosplay as a French aristocrat resembling Lady Oscar from The Rose of Versailles. Herein, she refers to Teruma as "Andre," after the grandson of Oscar's nanny.

Darami is a selfish and greedy woman who relies solely on her maids to do all the work for her. She is also characterized by her stereotypical rich girl laughter.

Princess Darami is one of the Four Kings of Dark Lizard along with Kodoh Kuraki, Hanbei Takeichi and Daizou Ohka.

Darami appears in Episode 22 (The Angel, Demon and Princess) in which she fiercely competed against Teruma to find two out of three diamonds hidden around her estate. In the end, Darami somehow won because Nana found the third diamond and had it sent to her address. 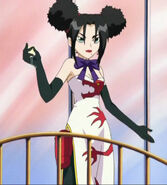 Darami with her first B-Daman

Darami clings to Hanbei Takeichi
Add a photo to this gallery
Retrieved from "https://bdaman.fandom.com/wiki/Princess_Darami?oldid=41802"
Community content is available under CC-BY-SA unless otherwise noted.