The number two B-Shot in the West Block.

His B-Daman is the precision type Strike Cobra.

He is a street smart bad-boy who never lets his target escape once he has it in his sniper-like sights. In his block, he considers Samuru his rival.

Reggie is a tall boy with green hair and green eyes. His hair is a spiky green rapped in a dark orange bandana and his eyes are a piercing forest green matching his hair perfectly. He wears a tight longsleeved shirt with special colored designs, the main color is a teal blue and along the collar and wrist areas is a green color separated by while lines. On his hands he wears silver wristbands and gold rings. At the very bottom of his shirt is a black section that tucks into his long black sweatpants with two white lines near the ankles. On his feet he wears large high top green, blue and white sneakers.

Wait a Minute! He's the Champion?

Reggie debuted when Riki got his second call for a Crossfire challenge. Reggie was at the second station and was the first to set the time on the challenge. He easily knocked away most of the pins and used his Super Shot to knock away the last, just to show off. He then bragged to the other players including Samuru who eventually toppled Reggie's time. 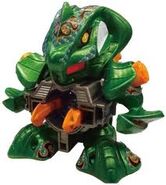 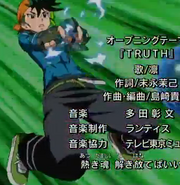 Reggie in the Opening, TRUTH. 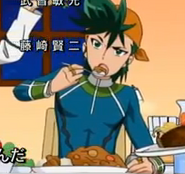 Reggie in the Ending.

Reggie after blowing up the snake hologram

Reggie is talking to Samuru