Start a Wiki
Rekuso (Japanese: 烈紅龍, Rekkouryu) is Li's first B-Daman, second in the manga, developed from Kouseiryu. It is a Rapid Fire-Type B-Daman in the Zero System. While the Takara version was only sold as armor, the Hasbro version was sold as a complete B-Daman. It was first released in Japan in November 2003, and sold for 480円.

The Hasbro version of Rekuso came with a red IBA Body skeleton with dark red arms and feet.

The Maw Helmet armor piece is based on the appearance of an oriental-style dragon, boasting a yellow visor. For Rekuso, it came with a V-shaped crest, the Level Sight, which is used for aiming.

The Dragon Shoulders are a pair of stylized, segmented shoulder guards, and are more likely for cosmetic purposes. Rekuso has these in red, along with them being a mirror-reversal of Bakuso's.

The Dragon Foot pieces resemble dragon-like toes with sharp nails. Due to their design, they are found elongated which can provide additional stability for the B-Daman to support Magazines and such.

The Dragon Claws are a pair of stabilizers that extending backwards to stabilize the B-Daman for supporting fully loaded Magazine Armor pieces.

The Dragon Magazine is a segmented unit that allows the B-Daman to hold up to 6 marbles, four more than the base loading capacity.

Like with any IBA Body in the Zero System, the Core is molded into the skeleton, and cannot be interchanged. It has a yellow Trigger and Hold Parts.

Rekuso first appears when Li uses its rapid fire capabilities to challenge Yamato Delgado and Bull Borgnine. Due to the circumstances, it is combined with its brother B-Daman, Bakuso, into the fearsome Bakurekuso. It is later seen to have accuracy capabilities, as it was able to score a perfect 100 in Shoot the Gap. 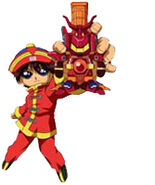 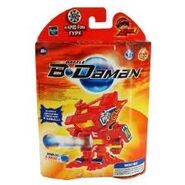 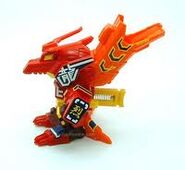 Electronic DHB Rekuso
Add a photo to this gallery
Retrieved from "https://bdaman.fandom.com/wiki/Rekuso?oldid=44701"
Community content is available under CC-BY-SA unless otherwise noted.