Start a Wiki
Rising=Dracyan (Japanese: ライジング=ドラシアン, Raijingu=Dorashian) is a Power-Type B-Daman; the upgraded form of Thunder Dracyan. It was released as part of the Emblem Charge System on March 16, 2013 in Japan for 997円.

Unlike with most Emblem Charge System B-Daman, Rising=Dracyan has a set of four Emblems instead of two. Two Emblem Parts on the shoulders of the Arm Parts, and the other two at the back of the Leg Part's feet. Should all four Emblem Parts be pressed, the user can perform a "Double Emblem Charge".

Its Rising Core possesses considerable competitive value, due to its massive firing strength, which could lead to recoil. The rubber parts of the Core can wear down after multiple uses, so it would be recommended to buy more than one copy of this B-Daman. When equipped with the Magnum Arm Version-Up Parts, its firing strength would become more powerful, resulting in more recoil. To resolve it, equip the Metal Stud Parts from the Twin=Drazeros SP Set. Another issue, asides from recoil, is ease of use; the holding method for Rising=Dracyan is rather awkward, due to the inclusion of the extra Emblems on the Leg Parts. Because of this, the Double Emblem Charge is difficult to master, and if it is not stable enough, you may get weaker shots. 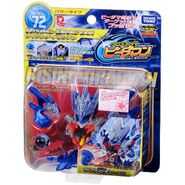 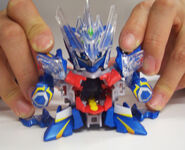 Comparison between the crowns. 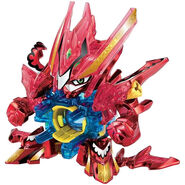 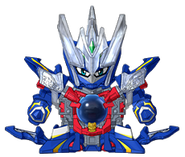 Ultimate Leg fully equipped
Add a photo to this gallery

Retrieved from "https://bdaman.fandom.com/wiki/Rising_Dracyan?oldid=29371"
Community content is available under CC-BY-SA unless otherwise noted.