Roma Day, known in Japan as Ryoma Godai (Japanese: ごだいリョーマ, Godai Ryoma) is the main antagonist of B-Daman Fireblast. He is the wielder of none other than the legendary Kylin B-Daman, Triple Gillusion. He is the Grand B-Master of Crestland, and the middle child of the Day family, being Kamon and Aona's older and younger brother respectively.

Roma is shown to wear a deep blue cloak, with a green cloth around his shoulders. Most of his face is concealed by the cloak's hood, as well as a metallic helm covering his eyes and nose, except for his mouth. Around his neck is a red, button-up standing collar. There is also a plume of yellow on the cloak's hood as well. When he unmasked himself in The Blue Showdown! Garuburn VS Dracyan, he is shown to have purplish-red eyes and dark green hair. He revealed to wears a blue shawl with yellow designs and underneath is a long sleeved black shirt with white designs. He also wears black belt with blue metal pieces, black skinny pants with red flames designs same as his brother and grey shoes.

Confirming this further is the presence of Roma in the Day family photo, when he was a toddler, in Strong Ally! Magnum Arm!.

Roma is a dark, vile, scheming tyrant, corrupted by his position as the Grand B-Master, and the knowledge of the power and control that comes with it, ruling over the B-Shots of Crest Land with an iron fist. He also believes in survival of the fittest, in which strong B-Shots overcome the weaker ones. Roma is also ruthless in battle, especially on that fateful day, prior to the events of B-Daman Fireblast, that he caused the loss of Drive Garuburn's B-Animal and of his brother's memories as a B-Shot. Yet, he wants his memories, so that he could force him to bring out his inner darkness. He is also not above having others, such as Agent Chaos, his right-hand woman, the Master Guardians, any B-Shot he brainwashes, or the meaner-spirited B-Shots of Crestland (through the rules of the Road Fight) do his dirty work for him. For some reason, he seems to acknowledge that even though he's the Grand B-Master, he is not necessarily above the WBMA's authority on B-Daman in general. However, he fiercely opposes the WBMA's ideals of playing B-Daman for fun, especially when in You're the Eastern B-Master, he used his own younger brother as a puppet, after forcefully bringing out his inner darkness, to ban Crossfire from Crestland and for any B-Shots that participates in them to be annihilated. Not only that, but he also holds little respect for his own father, as evidenced when he had his henchmen trap him in a net. It was also mentioned by Greg himself in Strong Ally! Magnum Arm! that before his corruption, he allowed Kamon to become the Southern B-Master. He is also shown to have no tolerance for any failures to his plans in ES026, especially when he took it out on Raydra by painfully squeezing him. It is revealed in ES038 that he was being manipulated by Triple Gillusion the whole time, as evidenced in a headache when unconsciously breaking free of the Kylin's control. It is also revealed in ES040 that prior to being controlled by the Kylin B-Daman, he and Kamon were very close to one another.

Prior to becoming the Grand B-Master, Roma and his younger brother, Kamon were very close to one another. At one point in time, his mother, Himiko Day, unearthed Right Drake on an archaeological dig. It was given to Roma after it was inspected by the authorities. Some time after gaining the Grand B-Master title, he began to see Kamon becoming more skilled as a B-Shot, and started to fear that he would be surpassed by his younger sibling. That reached a peak when Roma was given Left Stallion as part of a plan by Genya Kokuji to gain control of the world, re-awakening an ancient evil; the Supreme Mystical Beast of Darkness, Triple Gillusion. Tempted by the darkness in his heart, and the power offered by the Kylin, he willingly gave his life to Gillusion, resulting in him being put under the evil B-Daman's control, and also making him a pawn of Genya by extension. Corrupted by the darkness and his new found power, he started the Road Fight and its rules, also banning Crossfire from Crestland.

One fateful day, he was confronted by Kamon, who was the South Area B-Master, over the unrest in his area's players, challenging him to a Road Fight. With the powers of darkness at his command, Roma easily overwhelms Kamon and dismantling Garuburn while also scattering the parts. Roma then used Gillusion's power to suppress his younger brother's memories to this point.

Roma and his B-Daman appearing in a vision in Kamon's mind during the latter's berserker state...

Back view of Roma, hood put back 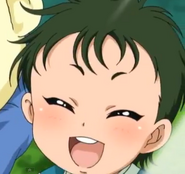 Roma as a toddler

Roma in the Day family photo 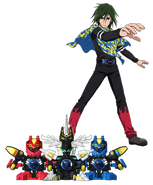 Roma (no cloak) and Triple=Gillusion

Ryoma in the Ending Theme
Add a photo to this gallery
Retrieved from "https://bdaman.fandom.com/wiki/Roma_Day?oldid=50186"
Community content is available under CC-BY-SA unless otherwise noted.