Rory is an eleven year old girl with short brown hair and green eyes. Her hair is medium height reaching down to her neck and she often to braided back her hair. Her normal clothes consist of a blue and long sleeved shirt with a red bow, dark blue shorts, black leggings and normal sneakers. As a announcer (or facility maiden), she wears her signature yellow bunny ears. On her torso she is quite skinny and she wears a yellow tank top covered by a blue sleeveless top with fur shoulder pads. Around her waist she wears blue shorts and normal shoes.

Rory is a young girl who often talks politely, she is also a B-Shot, but not very skilled in it. She cares for her friends, she doesn't like someone who uses B-Daman for doing bad thing. Rory revealed herself that she's good at disguising (but somebody said is to cosplay). She's the idol of everyone when in Cross Fight said by Kaito.

Ruri debuts inside the B-Daman training facility when she is the first to welcome Riki. She tells him about the practicing that goes on and how he will be tested. She gives him his equipment and stands by to watch the training and when everyone else laughs at Riki's performance she does not. She's also known as the granddaughter of Mr. Takakura.

Rory returns as a referee. She appears to be a good friend of Aona Godai along with Sumi Inaba. 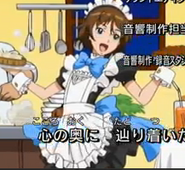 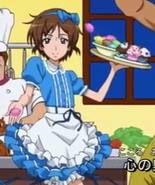