This article is for the manga version of Ryoma Godai. For their anime counterpart, see Ryoma Godai.

Ryoma is a very tall young man wearing dark-colored cloaks and a headgear that conceals the upper part of his head. Upon removing his disguise, he is shown to have a long green hair reaching past his shoulders and piercing red eyes.

As expected with the Grand B-Master; Ryoma has a contemptuous and authoritative personality.

Unlike his anime iteration, Ryoma's manga counterpart is more ruthless and psychotic, especially in battle. Herein, Ryoma is corrupt and power-hungry, especially with his obsession to obtain Spike=Phoenix, believing that it would give him total control over the sport of B-Daman on a worldwide scale.

Seeing that Kamon was a threat to his position as the Grand B-Master; Ryoma personally sent Byakuga Shiranui and Genta Ankokuji to do away with his brother. In the backstories, Ryoma physically and verbally abused the reluctant Kamon, which then resulted in the younger brother forcing himself into amnesia.

Ryoma Godai is the man behind the mask of the Grand B-Master. He rules Crest Land with an iron fist using the absolute rule of obedience in the Road Fight.

The cloaked Grand B-Master first made an appearance in Chapter 16 of the Manga. Therein, he is watching Kamon's fight against South Area B-Master Mitsuru Hachisuka from his laptop. 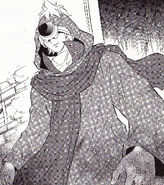 The reason for Kamon's amnesia

Retrieved from "https://bdaman.fandom.com/wiki/Ryoma_Godai_(Manga)?oldid=41789"
Community content is available under CC-BY-SA unless otherwise noted.