Humiliated by his second defeat against Enzi Hikigane, B-Daman Hunter Ryuichi Hoshino is found by Kyōji Kurokami. Kyōji gives him Sonic=Dravise and bidded him to take his revenge as well as to become his henchman. Ryuichi agrees and dons a new identity, going simply by the name of Hoshino. As Hoshino, he loyally works alongside Kyōji while also satisfying his fix for rare B-Daman.

In this alter ego; Hoshino has large, spiky hair pointed upwards and secured by a black headband with the letter "B" on it. He has large eyes and ears, with a light skin tone. He dons an armor of sorts in black and white alongside shoulder-pads resembling large B-Dama.

Aside from Smash=Dragold, Ryuichi possesses all four other dragon types which makes it possible for him to create the Ultimate Dragold super fusion. In the next chapter, he acquires Loading=Diles.

As Hoshino, he was given by Kyōji Kurokami a Sonic=Dravise to use as his weapon of vengeance against Enzi Hikigane. 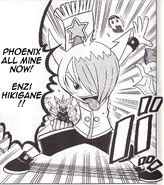 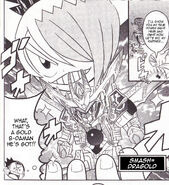 Ryuichi showing off his Dragold 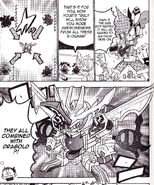 Retrieved from "https://bdaman.fandom.com/wiki/Ryuichi_Hoshino?oldid=38767"
Community content is available under CC-BY-SA unless otherwise noted.