Samurai Phoenix (Japanese: 鳳凰丸, Hououmaru) is a Power-Type Zero System B-Daman that owned by Joe. It was first released in Japan in February 2004, and sold for 680円.

Samurai Phoenix possesses a black IBA Body with green lines on the forearms.

The Helmet features a rubber part meant to resemble a phoenix's head and wings, along with a black fin that acts as an aiming sight. It also boasts a green visor with a yellow-green sheen to it.

The Burning Shoulder pieces are designed after the shoulder guards on samurai armor worn by the honor-bound warriors in Feudal Era Japan. Each piece reaches down to the forearms.

The Flight Buckle, which attaches to the front of the business end, is designed to resemble the frontal skirt of samurai armor. It is meant for cosmetic purposes, in keeping with the B-Daman's samurai motif.

The Foot Armor are designed to look like the talons of a phoenix. 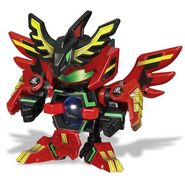 Samurai Phoenix in real life
Add a photo to this gallery
Retrieved from "https://bdaman.fandom.com/wiki/Samurai_Phoenix?oldid=41931"
Community content is available under CC-BY-SA unless otherwise noted.