Shade Wyvern (Japanese: シェードワイバーン, Shēdo Waibān) is a Left-Spin Rush Type B-Daman belonging to Kodoh Kuraki. It was often used in conjuction with Rave Pegasus. It was released in Japan on March 16, 2006, and sold for 903円, along with its counterpart.

Wyvern is black with a red colored helm. This helm has two horn designs on it and an ident that shapes it. It also has shoulder armor that has a yellow/orange designed sticker on it. The arms of Wyvern have no shoulder guards on them. Its legs are black with the feet having orange/yellow and white designed hooks. Its black Hold Parts are a mirror-reversal of Pegasus', meant for left-spin shots as opposed to its counterpart's right-spin shots. On the right shoulder is a Joint Part for connecting with Rave Pegasus at the shoulder for Docking Chariot Mode.

The Speed Grip is a silver color with a black trigger. The Grip Block has curves in it to give the user a more effective hold. On the bottom side of the grip are two blue lines. Essentially, it is a palette-swap of Rave Pegasus' Power Grip, but with no gears at all, relying instead on a lever. This was meant for rapid-fire shots.

Wyvern's own .67 Light Barrel is a different coloration from that of Rave Pegasus', and with wyvern stickers instead of those depicting pegasus.

Shade Wyvern in the toyline

Shade Wyvern and Rave Pegasus awakening and joining together.

The return of the two legendary B-Damans.

Kodoh with a dormant Shade Wyvern. 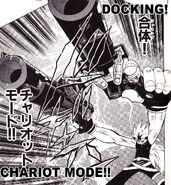 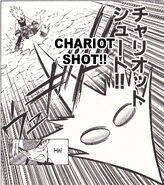