Shatter Breaker (Japanese: マガジンブレイカ, Magazine Breaker) is a real-life only B-Daman. The Hasbro and Takara Tomy releases of this B-Daman differ greatly in coloration and the Japanese version came packaged as armor only. This B-Daman uses a combination of Helio Breaker armor and Rekuso armor.

Only the Hasbro version included a black IBA Body.

The Hasbro Helio Helmet has a blue visor, and red eye designs just above it (different to the location of the eye design on Helio Breaker), all made onto a black helmet base. Its most distinctive features are the large white Helio Horns made of a hard rubber. It features an 'SB' marking on its decals, symbolising Shatter Breaker's name. The Takara Helio Helmet has a blue visor as well but no eye designs on it, and made onto a light blue helmet base. Like the Hasbro version, it features large white horns made of a hard rubber. The helmet features a 'MB' marking on its decals, symbolising Magazine Breaker's name.

The Dragon Claws are a pair of stabilizers that extend backwards to stabilize the B-Daman for supporting fully loaded Magazine Armor pieces. The Hasbro version has this molded in white while the Takara version is molded in navy blue.

Each Helio Foot piece covers a majority of the each foot, with a bulky, two-toed design, and four rivets each, providing some forward stabilization. The Hasbro version has this molded in black, with more 'SB' symbols on them while the Takara version is a light blue and sports more 'MB' symbols.

The Dragon Magazine is a visually-segmented unit that allows the B-Daman to hold up to 6 marbles; four more than the base loading capacity. The Hasbro version has this molded in white while the Takara version is navy blue.

This black Core with white Basic Hold Parts and Basic Trigger, is non-interchangeable and basic at most. This is applicable only to the Hasbro version as it was the only one to include an IBA body with the armor. 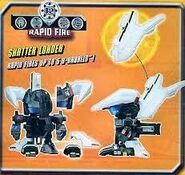 Back of the Hasbro packaging.

Back of the Japanese packaging.
Add a photo to this gallery
Retrieved from "https://bdaman.fandom.com/wiki/Shatter_Breaker?oldid=37206"
Community content is available under CC-BY-SA unless otherwise noted.