Shred Kaiser (Japanese: シュレッドカイザー, Shureddo Kaizā) is a Power-Type DHB System B-Daman, owned by Enjyu in the Battle B-Daman manga. It was released in December 2002 in Japan, and sold for 880円. It was upgraded from Cobalt Geist, that which Enjyu stole from Armada.

This component has a semi-translucent orange canopy, and a purple, three-horned helm with yellow lightning bolt designs. This kind of helm would carry over to its Zero System successor, Lightning Kahn.

The Arms has more pronounced points than those of its original form, featuring a pair of Shred Wings on the shoulders for more comfortable holding.

A Trigger with a large pad to make firing the B-Daman easier. Commonly seen on B-Damans equipped with a Drive Shot Core (see below), but not under this name.

Like its original form, Shred Kaiser features a Drive Shot Core, which features three Hold Parts in the classic "Delta" formation, along with a rubber strip to give fired marbles a forward spin.

Shred Kaiser comes with two black Legend Stones, one with the red eye and scratch marks that would appear on Lightning Kahn, the other with a red, six-pointed star shape with an evil eye in the center. 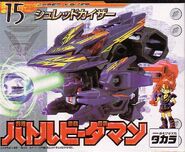 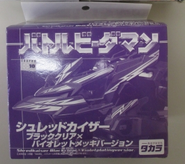 Retrieved from "https://bdaman.fandom.com/wiki/Shred_Kaiser?oldid=48875"
Community content is available under CC-BY-SA unless otherwise noted.