Slot Stinger (Japanese: スロット=ビードル Surotto=Biidoru, Slot=Beedle) is a Control Type B-Daman, part of the Emblem Charge System. It was released on September 29, 2012 in Japan for 945円.

It appears in the anime, B-Daman Fireblast owned by Misuru Hachuka.

Stinger's Head Part bears a huge resemblance to a bumblebee, both in design and color scheme. The head itself, extends outward, ending in a "nose" that generally resembles a honey-comb, forming a Head Scope that can be used to aim at targets. Three parts at the back push to the opposite direction, generally giving off a long face. With two decals for its green eyes, the "helmet" rests upon another set of rather, "sinister-looking" and mysterious red-eyes. With a general gold color, black highlights finalize the bumblebee influence.

Stinger's Emblem Pars are a pair of green hexagonal gems with its bumblebee motif printed on it. The design itself features a bee with a sinister expression, curling its "tail" which ends in its stinger or "needle". Also paired with a folded wing, these emblems are used to increase the control and more accurately shoot out the B-Dama.

Stinger's Stud Parts are circular semi-translucent orange studs with a triangular-designed hole in them.

Stinger's Arm Parts, like the Head Part, carry a bumblebee-inspiration taken into account for its appearance. Armed with large grip shoulders resembling honeycombs, some prostrations protrude inward and out. Whole, its arm is quite tiny, the hands are bulky with small holes for the Emblem Parts and ends as a fist camouflaged by a distinctive "claw" or needle on armor.

Stinger's Leg Part are generally basic feet with a golden design and checker-board black-and-purple highlights. Also, a needle as a "toe" or "claw" in retrospect to an actual bee carrying a needle at the end of its tail.

The Slot Core is predominately black with orange Hold Parts and a Trigger. It is mainly used for Control Types to improve accuracy and overall Control. This Core Part also features an Under-Stroke Rail on the bottom that prevents the trigger from wobbling when pressed. 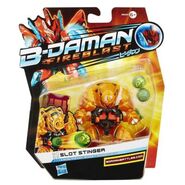 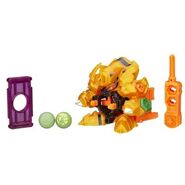 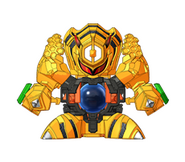