Sonic Dravise (Japanese: ソニック=ドラヴァイス Sonikku=Doravaisu, Sonic=Dravise) is a Rapid-Fire Type B-Daman, part of the Emblem Charge System. It was released on September 29, 2012 in Japan for 945円.

Sonic Dravise's Head Part is essentially an upgraded version of its predecessor's Head Part. Firstly, it has been given extra details and designs which cause it to appear slimmer and taller, yet it still manages to deliver the original Rev=Dravise look. The original horn is now higher and straighter; even having the ability to be pushed forward, for a mode change into "Sonic Mode" in order to better hold the figure. This allows you to aim precisely which benefits this Rapid-Fire type B-Daman which would usually go out of control with too much B-Dama. Also in doing this, the horn allows for more precise rapid-fire shooting. The two other horns are slightly longer with better detail added onto them with improved decals of the shades of blue, along with a red decal for extra eyes. Also, it gives off the impression that the Head Part is somewhat of a helmet. Wearing this "helmet", is the face of Sonic Dravise with its pink eyes and a silver backing. The small spiked protrusions that were near the eyes have become bigger and finally, Sonic Dravise seems to have been given a longer chin and some impression of a mouth.

Sonic Dravise's Emblem Parts are a ruby-red pair of diamond-shaped pads encrypted with a stylized marking of the Legendary White Dragon, Dravise itself.

When pressed down, these emblems add extra firing strength to Sonic Dravise's Core Part and as of which, provides exceeding Rapid Fire aptitude while straightening out the shots.

Sonic Dravise's Stud Parts are circular solid blue studs with a triangular-designed hole in them.

Sonic Dravise's Arm Parts are some upgraded variants of Lightning Dravise's. Sonic's are more sleeker and curved, as opposed to Rev's bulked and basic design. Though the curved spikes from Lightning Dravise have changed to become more linear as well as having two small holes beside them to fit Sonic Dravise's Emblem Parts. Other than that, the arms are white with dark/light-blue decals.

Sonic Dravise's Leg Parts resemble upgraded formations of Rev's Leg Parts. Basically white, the feet have now become larger and bulkier than before, mainly due to the ability to accommodate B-Dama. This is part of a gimmick where these spheres or "B-Dama Rollers", rather, give the B-Daman better mobility when it is sliding. This allows it to go side to side, foward, and back. Blue decals are once again showcased.

Sonic Dravise's Core Part is grey with a dark-blue handle at the back along with linear-esque spikes throughout. Like with the original Rev, Sonic has two rollers to smoothen out firing, and this time, they are new spherical Ball Rollers that create less friction, improving upon the rollers in Rev. In conjunction with the Emblem Parts of Sonic Dravise, they are used to maximize Rapid Fire shots. Due to the nature of the core itself, it is prone to low-accuracy retention during Rapid-Fire similar to a machine gun. It is highly recommended to use a barrel with this Core, unless you are using the Dravise 2 Head Part. 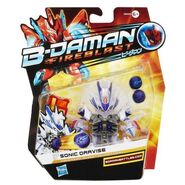 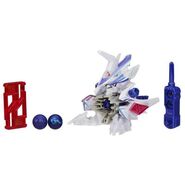 Blast Sonic Dravise (note the absence of the Blast Mail).

With a Cyclone Magazine 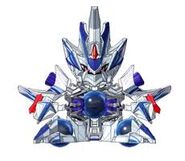