Spin=Dravise (Japanese: スピン＝ドラヴァイス, Supin=Doravaisu) is a Power-Type B-Daman, part of the Core Change System. It received a limited release starting August 4, 2011 in Japan. It is a limited edition variant of Rev=Dravise in chrome paint and a clear core. It was marketed as Spin=Dravise Silver Plated Ver.

Spin=Dravise's Head Part is essentially a chrome silver recolour of Rev=Dravise's. With a dragon-inspired design, this Head Part appears as a dragon head wearing a helmet. The helmet extends left and right, carrying an upward slope as well. A horn sits atop the helmet, raised and curved in order to better handle one's grip to the B-Daman. Two spiked straps stick to the B-Daman's face, ending the helmet. Its dragon face offers anime-like violet eyes with a black pupil and white eye-lids. The impression of a chin is also left, slightly curved.

Spin=Dravise's Stud Parts are pink recolours of the original blues. Cylinder in shape, these fit into small two small holes on the B-Daman's Arm Parts to prevent them from falling off.

Designed with bulky shoulder-pads, featured with holes for the Stud Parts to go through, two curved blades protrude from their respective arm. The arms end with a large armoured fist and three claws on each.

These feet are teeming with spikes and bumps with the addition of several curves and minor slopes. The feet also feature two "toes". Unlike its standard form, Spin=Dravise does not come with the distinctive rollers.

Spin originally appeared in Core Random Booster Vol. 1 as the "Super Rare" Core in Japan. It features a new body shell similar in design to the generic Core Parts like One-Sided, Steer, and Torque, but more streamlined. Spin also has two Hold Parts, with spear-like tips of differing design and size, along with a standard Trigger. Horizontally mounted on the Hold Part with the larger tip is a rubber strip, similar to Accele. The Core's gimmick, which leads to its name, is that when a B-Dama is fired from it, the rubber strip gives it a sideways spin. When the B-Dama hits a wall while it spins, it rebounds at an angle. The direction of the spin can be changed by taking apart the Core, flipping the Hold Parts, and then putting it back together in that form. The core itself is molded in clear plastic while the hold parts and trigger, like the B-Daman's stud parts, are molded in a solid bright pink plastic. 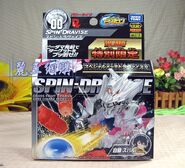 A photo showing the core's rubber strip (blue piece).
Add a photo to this gallery

Retrieved from "https://bdaman.fandom.com/wiki/Spin%3DDravise?oldid=36631"
Community content is available under CC-BY-SA unless otherwise noted.