Stag Cerberus (Japanese: スタッグケルベロス, Sutaggu Keruberosu) is a B-Daman in the Plug-In System, owned by Cerer in the Super B-Daman manga. It was released in December 1998 in Japan for 780円. It combines König Cerberus' multi-function gimmick, with the curving shots of Stag Sphinx.

Stag Cerberus' PI Head is a redesign of König Cerberus' Head Gear, with the two prominent protrusions and two smaller ones now more pronounced, and adjustable. As with Battle Phoenix, it has a hatch that can be removed to allow the attachment of magazine-type PI Parts. There are also new stickers with blue-and-white designs. On the sides, are two growling canine heads, resembling a wolf, representing the three heads of Cerberus.

Unlike with König Cerberus' Side Arms, these redesigned PI Arms do not have the distinctive Tight Shoulders, nor do they have any pads for pushing in the Hold Parts for extra strength. The V-shaped designs now somewhat resemble the letter M or W, depending on the perspective. There are also small, black shoulder guards with gradient orange/yellow and blue-and-white stickers on them.

The solid-black PI Frame has a set of three yellow Hold Parts (one of which having a red rubber strip) supported by springs. They are mounted on a blue Hyper Adjuster Ring that, when rotated, adjusts the B-Daman's power. The firing mode is also changed by the rotation. When the Hyper Adjuster Ring is rotated, the rubber strip would be used either for drive shots, back-spin shots, or spinning shots (curved shots in Stag Mode).

Cerberus' PI Foot is a solid-blue in coloration, with gradient red/orange/yellow stickers on the sides, along with two-toned gray stickers on the insteps, separated by a black line. On the back is an extension that serves a double-purpose; in Kerberos Mode, it keeps the PI Trigger from wobbling too much when you push it, and it also serves as a downward ramp in Stag Mode for curved shots.

Stag Cerberus features a lengthy blue PI Trigger that boasts a pair of small wings known as Burst Selectors, that can be positioned to change the number of shots that can be fired from the B-Daman at a single push, either single shots or double shots. 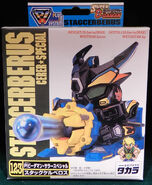 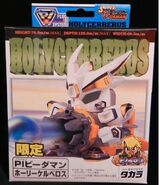 with Drift=Jacker
Add a photo to this gallery

Retrieved from "https://bdaman.fandom.com/wiki/Stag_Cerberus?oldid=48902"
Community content is available under CC-BY-SA unless otherwise noted.