Stream Drazeros (Japanese: ストリーム=ドラゼロス, Sutoriimu=Dorazerosu, Stream=Drazeros) is a Special-Type B-Daman; the upgraded form of Double Drazeros. It was released as part of the Emblem Charge System on January 26, 2013 for 997円.

It appears in the anime series, B-Daman Fireblast owned by Basara Kurochi.

The Head Part, while having the same two-headed dragon motif as the original Double Drazeros, features a fiercer, spikier design with gold-colored details. Between the twin dragon heads is a third major spike that may be useful for accuracy. Like on the original, the twin dragon heads have eye designs, as well as the distinctive anime eyes in the visor area as well, only they are blue instead of purple.

Interestingly, Stream Drazeros' Emblems are put on a new pair of Emblem Wing Parts, each of which consisting of one inner ring and one outer ring, each one with two triangular spikes. The Emblems, which are hinged on the inner rings, can be flipped open to reveal holding spaces for two marbles, as with the Wing Parts of Double Drazeros. The Emblem Wing Parts can be placed in a downward position, changing the B-Daman to Stabilizer Mode for better control. The real kicker is how Stream Drazeros' Emblem Charge works; the Wing Parts can be removed and placed in a sideways manner on special sockets on the Arm Parts in eCharge Mode, where they can be pulled back for an Emblem Charge Shot.

Stream Drazeros has white plastic Stud Parts, as with the original Double Drazeros B-Daman from the Core Change System.

The B-Daman's Arm Parts have protrusions to which the Wing Parts can attach for e-Charge Mode, and push in the Core's prongs for the Emblem Charge Shot.

The Leg Part is essentially a fiercer-looking version of the one on Double Drazeros, with the triangular spiked design.

As with the original Twin Core from the Core Change System, the Stream Core has an elongated trigger piece that can be used to fire two marbles at once with a single push. The Core also boasts a pair of rollers on its Hold Parts, making for smoother shots. On the business end of the core are four yellow triangular designs, two of which acting as the eyes for a simple dragon head. Just as the Twin Core was power-intensive, Stream is rapid fire-intensive, with the rollers making for a rapid stream of marbles, hence the Core's name. 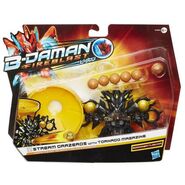 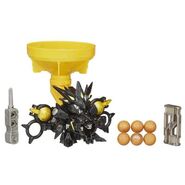