Strike Dragren (Japanese: フォース=ドラグレン, Fōsu=Doraguren, Force=Dragren) is one of the five Legendary Dragons and a Control-Type Core Change System B-Daman in B-Daman Crossfire. It is owned by Novu Moru. It was upgraded in Cross Fight B-Daman eS as the powerful Assault=Dragren, in the Emblem Charge System.

This Head Part has a set of three horns (two in the rear, and one in the front), which can be used as cross-hairs when aiming at targets. Its frontal horn piece can be removed and attached to Smash=Dragold's Head Part as part of the Ultimate Dragold Super Fusion. In the Takara-Tomy version of this B-Daman, it has the CBC number 027, for use in the B-Ta 1Go arcade game.

Strike=Dragren's Arm Parts have a pair of spiky hands, along with a pair removable wings, the Gravity Arm, which can be rotated to a downward position, to act as stabilizers, changing the B-Daman to Sniper Mode, for added control and grip on the floor of the playing field. They can be made more secure by adding two extra Stud Parts to them. When the B-Daman is not in Sniper Mode, the wings of the Gravity Arm can act as handle grips for aiming.

On the back of this Leg Part are two pegs, to which one can attach the Arm Parts of Round=Tigare as part of the Super Fusion into Mighty Dragren (see below).

Force has a set of Double Hold Parts meant to compress fired B-Dama into a straight path for accurate, spot-on shots, with the four claws at the business end helping to further straighten out the shots.

Mighty Dragren (パーフェクト=ドラグレン, Pāfekuto=Doraguren, Perfect=Dragren) can be achieved only when Strike Dragren is in Sniper Mode with the Gravity Arm positioned downwards. What the player does, is that he takes the sides of the face of Round=Tigare's Head Part, and attaches them to the front of the Force Core. Then, he takes the Tigare Sight and attaches it in front of the two rear horns on Dragren's Head Part to add more to the cross-hair sight effect. Lastly, he is to take Tigare's Arm Parts and attach them to the back pegs of Dragren's Leg Part, thus completing the transition into Mighty Dragren. Additionally, Dragren takes two gold Stud Parts from Tigare to secure his Gravity Arms.

In the anime, it was shown to also use a Metal Force Core in its animation model. 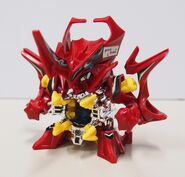 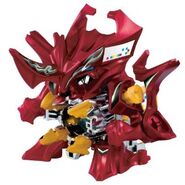 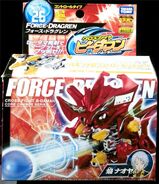 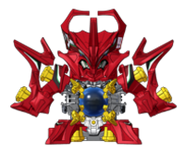 Strike Dragren CG
Add a photo to this gallery
Retrieved from "https://bdaman.fandom.com/wiki/Strike_Dragren?oldid=48678"
Community content is available under CC-BY-SA unless otherwise noted.