Strike Scorpio is an unreleased Rapid-Fire Type B-Daman released under B-Daman Crossfire. It uses the Core Change System and is a Hasbro-exclusive product.

The Scorpio Head has a Scorpion motif. It could be used as a grip along with the Scorpio Arms.

The B-Daman's Arm Parts each have a motif of a scorpion's arms and pincers. Their design allows the user to hold them like handle grips, or as the B-Daman's gimmick suggests, do a one-handed hold on either side.

Force has a set of Double Hold Parts meant to compress fired B-Dama into a straight path for accurate, spot-on shots, with the four claws at the business end helping to further straighten out the shots.

Ready…Aim…Crossfire! Go for total target obliteration with this unstoppable Strike Scorpio figure! His Force Core will make his precision shot blast your target with fierce accuracy! Pull back, then push forward on the trigger to launch one of your marbles. For a speedy strike, use your Hypersonic B-Da Marble, or bash with power with your Iron Blast B-Da Marble! Who will triumph in the end? Load up your marbles and start taking down your targets with your Strike Scorpio sharpshooter! Hasbro and all related terms are trademarks of Hasbro. 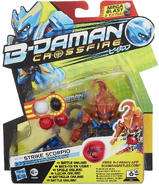