Strike Tigare (Japanese: ラウンド=タイガル, Raundo=Taigaru, Round=Tigare) is a Hybrid Rapid-Fire/Control Type Core Change System B-Daman from B-Daman Crossfire. It is owned by Derek Watari. The B-Daman also had an early release in the 2012 World Hobby Fair.

The Head Part is meant to resemble the head of a white tiger, with a red visor in the tiger's open mouth. The sides of its face and the top part can be used as parts for the Super Fusion with Strike Dragren into Perfect/Mighty Dragren, or Kreis=Raydra into Perfect Raydra.

The Arm Parts of this B-Daman are designed to resemble the forelegs of a tiger, with hands resembling tiger paws. It also has orange rubber sections that work as stabilizers for the Super Fusion into Perfect Dragren or Perfect Raydra.

Round=Tigare has dull, gold-colored Stud Parts. However, like certain other parts of the B-Daman in that color, it suffers what is known to fans of the Transformers franchise as "Gold Plastic Syndrome", in which plastic pieces of a golden color become brittle with age, and will break if one is not delicate enough with them.

The Leg Part consist of a pair of tiger paws for feet, and are relatively basic.

Like the Cores of Strike Avian, Lightning Fin, Strike Cobra, Thunder Bearga, and Lightning Scorpio, the Round Core has a generic base. It has six Hold Parts that never extend outward from the front, three on each side in a circular formation, hence the Core's name. What it lacks in firing strength, it makes up for in Rapid Fire and Control capabilities. Its Trigger is extended by a tongue curving outward, similar to Thunder Bearga, but shorter. 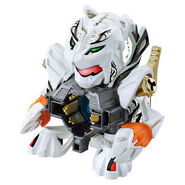 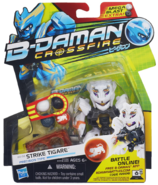