Sumi is an eleven-year-old girl with black hair and blue eyes. Her hair is long reaching past her torso and her eyebrows are short and thin. She is a skinny girl that wears a yellow shirt with a blue butterfly design under a baby blue sweater. On her waist she wears a checkered red skirt with black lines reaching to about the middle of her thighs. On her legs she wears long navy socks with a red line and on her feet she wears baby blue and white sneakers with red dots on the sides.

Sumi first debuts with Riki in their school class. After school, she and Riki go to the park where she shows him her new B-Daman, which was Lightning Rabbit. She then participated in a B-Daman challenge where she knocked over nine out of ten 50 Point target pins on her first try nearby Riki's temporary job. After Riki was done with work, they both went to the B-Daman shop, where he was allowed to pick out his very own B-Daman.

She is shown to be very caring for her friends, especially Riki to which she has hinted to have a crush on.

Sumi and her B-Daman 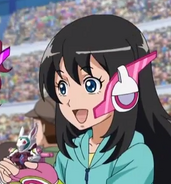