Start a Wiki
Thermal Lance (Japanese: ガーランドブラスト, Gārandoburasuto, Garland Blast) is an Accuracy-Type B-Daman owned by Alan. This B-Daman was first released in Japan as an exclusive on August 5th, 2004, bundled with the collector's edition of the Battle B-Daman video game for the Nintendo GameBoy Advance. This bundle only included the visor, barrel, and special hold parts. The japanese Thermal Lance stickers are provided as appendix for the magazine coro coro comics August 2004 issue. The Hasbro release of this B-Daman is substantially different from the Japanese version; it was released as a complete set but lacks many parts that the original Thermal Lance from the video game had.

As with any B-Daman in the Zero System, Hasbro's Thermal Lance has a standard IBA Body skeleton, while the Japanese version never provided a skeleton.

Like with Cobalt Blade, the horn on Thermal Lance's helmet functions as improving one's accuracy when they are about to fire B-DaBalls. Moving the B-Daman itself will change direction of the horn, changing sight as well. It serves as a sort of "lock-on target" to the opposing B-Daman or object, in general. Compliments the fact that this is an Accuracy-Type B-Daman. The blue parts on the Japanese version are molded in a more aqua dark-blue color whilst the Hasbro version is molded in a bright navy blue.

A long barrel-type appendage that attaches to the front of the B-Daman's body to provide accuracy in the same way Bakuso's Focus Barrel would. Again, the blue parts on the Japanese version are molded in a more aqua dark-blue color whilst the Hasbro version is molded in a bright navy blue.

In the Japanese version, these are depicted as a variation of Accel Leon's Leon Shoulders and feature metallic gold/blue/red stickers. In the Hasbro version, they are simply Wing Ninja's Eagle Shoulder pads re-used but made from a hard rubber much like Helio Breaker's horns instead of plastic.

Only the Japanese version was depicted to have this; a variation of Wing Ninja's Wing Grip featuring metallic blue stickers with ornate gold and red designs. This is absent in the Hasbro version.

Only the Japanese version was depicted to have this; a variation of Cobalt Blade's Gauntlets, featuring metallic blue and gold stickers.

Claw-like foot armor that is shared with Wing Ninja's foot piece. However, Wing Ninja's foot armor is made of a flexible rubber, Thermal Lance's is not and is instead made from a hard rubber much like Helio Breaker's horns. Only the Hasbro version came with these parts.

The Japanese version of Thermal Lance featured special Hold Parts designed for spin shots, by means of a bluish rubber strip that gives a horizontal spin on fired B-DaBalls. The spin direction can be changed by taking out the Hold Parts, and flipping them before putting them back in. The Hasbro version did not come with this gimmick, instead using the standard Basic Hold Parts.

Alan's favorite B-Daman. An all-round B-Daman that has an ancient holy power. The Thermal Extension has a holy cross which improves accuracy, it can also function as a short barrel or a sight. The barrel has a Tornado Core function allowing it to make spin shots. This is surely the strongest B-Daman. 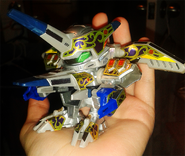 Standard Japanese Thermal Lance without any decals applied. White feet parts have been used here instead of the recommended grey parts.

Thermal Lance's Japanese packaging (on the right), showing the parts that come in the box.

Instruction manual printed on box to build your own Thermal Lance 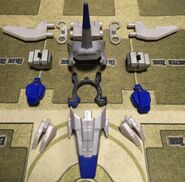 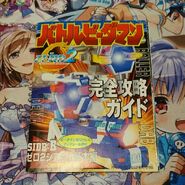 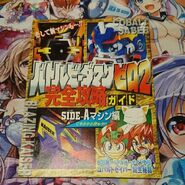 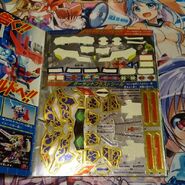 Thermal Lance from the GBA game.

Debut in the game. This is the only time you get to see the full B-Daman without its Wing cropped.
Add a photo to this gallery

Retrieved from "https://bdaman.fandom.com/wiki/Thermal_Lance?oldid=48415"
Community content is available under CC-BY-SA unless otherwise noted.