It appears in the anime series, B-Daman Crossfire and B-Daman Fireblast, owned by Gunner Arano.

This Head Part is based on a bull's face as evident through its design. It is a bright red, using a red and black decal on its forehead with a red, golden-edged hexagon depicting a black bull's head with red eyes. It features two long, curved horns known as the "Bison Horns". Due to their design (with its multitude of indents), it serves as a Grip for the B-Daman. Additionally, they attach at the head's sides and are detachable to be placed onto the Bison Arms, acting as Stabilizers for "Stabilizer Mode/Full Horn Mode".

The Arm Parts have big cylindrical armor plates using black, gray and red stickers resembling waves. The rest of these bright red arms are longer and thinner, also using yellow and blue stickers at the hands. It also features holes for the Bison Horns to attach, converting the B-Daman into Stabilizer/Full Horn Mode.

These Stud Parts are copper-brown in color.

The Leg Part is rather large in surface area, thanks to how long and thick the feet area is with circular impressions. They are bright red and use red, black, gray, yellow and blue stickers.

The Burst Core, unlike with most other Core Parts, has no spring in its Trigger. This, in combination with the Bison Grip trigger extension, is intended to allow the user to push the trigger using more of their actual arm strength, in theory allowing B-Dama to be launched with more power. It uses the same type of body shell as Spin. In addition, the Bison Horn can be attached to the core as parts of a barrel extension intended to stabilize the front side of the B-Daman during power shots using the Bison Grip. 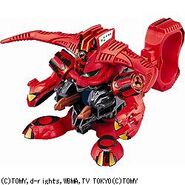 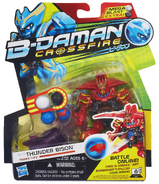 With Gunner Arano and its B-Animal.