Thunder Fin is a Power Type B-Daman released under B-Daman Crossfire. It uses the Core Change System and was released on November 2013 internationally.

The head has a Shark motif and recolored from Lightning Fin.

The arms are basic and recolored from Lightning Fin

The studs are colored blue.

The legs are basic.

Spin originally appeared in Core Random Booster Vol. 1 as the "Rare" Core. It features a body like that of Break core, and two Hold Parts, with spear-like tips of differing design and size. It also features a Trigger like that of certain other Cores. Horizontally mounted on the Hold Part with the larger tip is a rubber strip, similar to Accele. The Core's gimmick, which leads to its name, is that when a B-Dama is fired from it, the rubber strip gives it a sideways spin. When the marble hits a wall while it spins, it rebounds at an angle. The direction of the spin can be changed by taking apart the Core, flipping the Hold Parts, and then putting it back together in that form

Ready…Aim…Crossfire! Go for total target obliteration with this unstoppable Thunder Fin figure! His Spin Core will make his power shot boom like thunder and blast your target! Pull back, then push forward on the trigger to launch one of your marbles! Who will triumph in the end? Load up your marbles and start taking down your targets with your Thunder Fin sharpshooter! Hasbro and all related terms are trademarks of Hasbro. 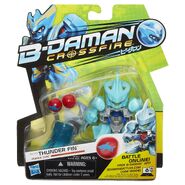 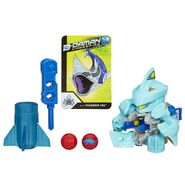