Triple=Gillusion (Japanese: トリプル=ギルシオン, Toripuru=Girushion) is a Special-Type B-Daman that is part of the Emblem Charge System. It was released in Japan on July 20, 2013 for 2,310円. It is wielded by Ryoma in the Cross Fight B-Daman eS anime, and is the arch-nemesis of Spike=Phoenix. According to an ancient lithograph, this malevolent, three-in-one B-Daman has a mind control ability maintained by the life energy of whoever acted as its partner (or in its perspective, its servant).

The Gillusion Head is composed of a combination between pieces of Left=Starion and Right=Drake's own Heads. It borrows the black dragon helm from Drake but conversely uses more from Starion. This includes the Starion's pegasus "mane" placed between the dragon head, similar to a mohawk. It does however use two exclusive parts unseen on Left=Starion which are pegasus-like fur pieces connected beside the dragon snout; creating kirin whiskers. Also, the two white eye-parts from both Left=Starion and Right=Drake are equipped.

Gillusion does not harbor its own Emblems but rather utilizes Left=Starion and Right=Drake's. Due to its design, Starion and Drake's Emblem Parts cannot affect Gillusion's Core and only theirs. These consist of the red, hexagon-shaped Emblem fitted on the right Drake Arm and the blue, hexagon-like one found on the left Starion Arm. Pushing these pieces will add additional friction and force to the Left and Right Cores when shooting B-Da Marbles.

This B-Daman does not have Studs itself but because of being connected to Left=Starion and Right=Drake, they act as Gillsuion's Stud Parts.

The Gillusion Arms have the same mold as its combined B-Daman - black with yellow decals for each fist. Its only distinction are Starion's foot armor used as shoulder-pads here. The Cores Left and Right connect to these via a protrusion.

Other than its Core, the Gillusion Leg is this figure's only part different in mold from Drake and Starion. It is black with a raised protrusion on each foot decorated with turquoise stickers. Along with this, it takes Drake's white Leg Part armour for use on this piece.

Triple is unique in that it is the first three-in-one B-Daman Core. As the name suggests, it is connected to the Left and Right Cores and shares a Trigger also connected to them. The Triggers are connected via the pegasus helmet from Starion, as well as the grip handles from Starion and Drake. As a result, this extended pad is pushed to fire B-Dama loaded in Left, Triple, and Right simultaneously. This is known as a Triple Shot.

To achieve this form, you would need a Scope Magazine w/ Wide Magazine nozzle for the central Head Part, a System Magazine for the Drake Head, and a Cyclone Magazine (with the top half removed) for the Starion Head. By adding these magazines to Gillusion, its load capacity for B-Dama is increased by a significant amount. This configuration is specific to the anime, so any three magazines could be used for this mode.

Triple=Gillusion is one of the two Ultimate Holy Beasts of Crest Land, alongside Spike=Phoenix. However, Gillusion became ambitious and wanted to control everything, so it challenged Phoenix and both sealed their spirits in the form of two powerful B-Damans for the potential, earth-shattering conflict to come. In ancient times, in the very first B-Daman battle in Crest Land, which took place on Phoenix Battle Island, the two legendary B-Animals (in the form of their respective B-Damans) and their owners fought fiercely in a game of Break Bomber. It was revealed in Showdown at the Summit! Kamon vs Kakeru! that Gillusion attempted to cheat by controlling its rival's master during the battle, but the latter resisted its evil power. The Phoenix and its wielder won out, leaving the Kirin B-Animal and its master (and priests) embittered at this defeat. Afterwards, Gillusion was separated into two component B-Damans and hidden away, possibly as punishment for their treachery as Gillusion. Centuries later, archaeologist Himiko Godai finds one of these B-Damans, Right=Drake, and gives it to her middle-born child, Ryoma, after it was inspected by the authorities. In addition, a man working for the prominent Shiranui Corporation named Genya Ankokuji, whose family are the descendants of priests who lived to serve Gillusion, finds Left=Starion, and gives it to Ryoma, resurrecting Gillusion and allowing it to control the Grand B-Master.

Through Ryoma and its alliance with Genya (who took on the alias of "Agent Dark"), Gillusion established the Road Fight and its rules, especially one in particular, where the loser must do as the winner says, that which encouraged bullying. The punishments for breaking the rules of the Road Fight were a means to oppress people. At one point, it took control of a woman named Akari Komyouji, who is a descendant of Spike=Phoenix's priests, and had her serve as his partner's right-hand woman. When Ryoma's younger brother, Kamon challenged him, Gillusion was used for the battle. With its overwhelming power, Gillusion easily defeats Kamon and his Drive=Garuburn, banishing its B-Animal and scattering the pieces all around the world. Its abilities were then used to suppress Kamon's memories up to that point. Gillusion first appeared in the anime as an unknown, silhouetted B-Daman seen in a vision Kamon has of Ryoma, when he goes into his Dark state the first time, in I'll Protect It! DX Break Bomber 7!. Though it did not physically appear, its mind control ability was used by the Grand B-Master himself in The Blue Showdown! Garuburn VS Dracyan to restore Kamon's memories while forcefully taking control of him and Drive=Garuburn, both of whom were freed by Riki and Dracyan in Final Battle! Garuburn VS Dracyan.

Although it was not named, Gillusion was mentioned as the Kirin in the ancient legend of Crest Land by Himiko Godai in Mystery! The Legend of Crest Land. It also appeared in the episode's ancient times flashback sequence, again as a silhouetted B-Daman, with the difference being its crown now resembling a trident (a possible foreshadowing of the Kirin's Triple eCharge Shot). In Decisive Battle! Garuburn VS Deathshell, its power was split into its components, Right=Drake and Left=Starion. The episode after that, the two B-Damans were used by Ryoma against Byakuga and Genta in a game of DX Break Bomber 7 on Phoenix Battle Island, defeating them in The Ultimate Enemy! Triple=Gillusion. 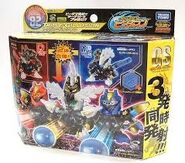 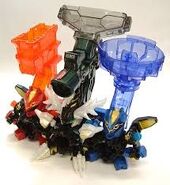 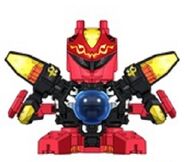 One of it's components, Right=Drake
Left stalion.jpg
It's other component, Left=Starion
Add a photo to this gallery

Gillusion and its former owner in ancient times

Revelation in the trailer for ES038.
Add a photo to this gallery

Retrieved from "https://bdaman.fandom.com/wiki/Triple_Gillusion?oldid=29388"
Community content is available under CC-BY-SA unless otherwise noted.