The Straight Barrel (Japanese: ストレートバレル, Sutorēto Bareru) is the first Tune-Up Gear and Barrel released in the Cross Fight B-Daman toyline. It first released under the Pen-B System on August 28, 2010 for 560円 with a reissue October 15, 2011 retailing 525円.

The Straight Barrel is the first Cross Fight Barrel released and as of which, features no gimmicks at all. As a black Barrel with red stickers, it connects to a Pen-B, Core Change or Emblem Charge B-Daman's Core at the front. It is quite streamlined, with two curved covers which help straighten the B-Dama at the top. The sides are also covered for the most part with stabilizing protrusions beneath to support it. Also, there is a small Sight to assist aiming. For its use in the B-Ta 1Go arcade game, its CBC number is CBC-072.

Competitively however, the Straight Barrel is not as "complete" design-wise or solid as the True Aim Barrel or Convert Barrel. Those are longer in length and provide additional features to better help Control-Types or even any B-Daman Type. 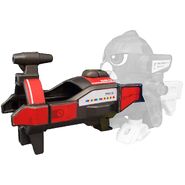 Connected to a Pen-B B-Daman.

With Stroke=Orochi.
Add a photo to this gallery
Retrieved from "https://bdaman.fandom.com/wiki/Tune-Up_Gear_-_Straight_Barrel?oldid=30904"
Community content is available under CC-BY-SA unless otherwise noted.