Not to be confused with Super B-Daman's Straight Magazine 10

The Straight Magazine (Japanese: ストレートマガジン, Sutorēto Magajin) is the first Magazine-based Tune-Up Gear released under the Cross Fight B-Daman toyline. It came out on August 28, 2010 in Japan, selling for 525円.

As its name suggests, the Straight Magazine is a loader designed straightly, making it a relatively basic piece with no gimmicks. Made of three parts, all being gray with red, black, yellow and white stickers using words like "CUSTOM", "MAGAZINE", "BM-08" and "SET". Due to its design though, the Magazine is unlikely to jam B-Dama - great for Power-Types. However to keep with its gimmick-less concept, it can only hold up to 8 B-Dama while the Wide Magazine outclasses it for the same low jam ratio but being able to hold 10 B-Dama. As a result, it will not be as effective for Rapid-Fire like the Tornado Magazine's 45 B-Dama capacity or even the Cyclone Magazine. Despite these cons, it makes a good custom with Lightning Fin.

It is important to note that despite releasing in the Pen-B System, it is completely compatible with the later Core Change and Emblem Charge B-Damans. 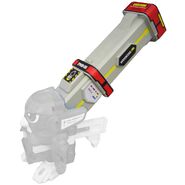 How it connects to a Pen-B B-Daman.

With Accele=Dracyan.
Add a photo to this gallery

Retrieved from "https://bdaman.fandom.com/wiki/Tune-Up_Gear_-_Straight_Magazine?oldid=32763"
Community content is available under CC-BY-SA unless otherwise noted.