Turbo Kahn is a Power-type B-Daman and a Hasbro-exclusive variation of Lightning Kahn from the Battle B-Daman series.. It was never seen in the anime show.

As a user of the Zero System, Turbo Kahn uses a light grey and maroon IBA Body skeleton.

The Kahn Visor consists of a light orange visor complimenting a Helmet with three prominent protrusions, each one having a rubber fin on the back.

Each piece of Shoulder Armor has a rubber wing to allow the user to hold the B-Daman better. On the fronts of both shoulders are white and red striped decals. Because this was a Hasbro release, the rubber wing attachments are made with a softer rubber than other Kahn variations from Takara Tomy.

The Kahn Foot pieces each feature a single triangular claw for forward stability.

The purpose of this component is to squeeze in the Hold Parts from the sides, increasing the B-Daman's power, similar in concept to Helio Breaker's Power Arms.

The Power Buckle is brittle and can be broken with repetitive use or strained easily with force. 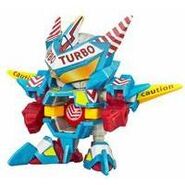 Built & complete Turbo Kahn.
Add a photo to this gallery
Retrieved from "https://bdaman.fandom.com/wiki/Turbo_Kahn?oldid=41957"
Community content is available under CC-BY-SA unless otherwise noted.