Tycoon Shou is a very tall man with a long black hair with red streaks which is similar to Hitto Tamaga, his biological son. For the majority of his appearance, he wears a long black cloak and a sinister-looking mask to hide his identity.

His necklace with the emblem of the Magajin bears a family photo taken shortly after Hitto's birth.

During flashbacks, he is shown wearing a turtleneck shirt and a lab coat.

Shou is easily seen as an obsessive and deranged man whose lusting for power. However, despite that, what lies in the core of a despot is a very lonely man who grieved over the loss of his beloved wife and the disappearance of his son. This is evident by the photograph of his lovely family that he carries inside his Magajin necklace suggesting that they are the utmost reason for the things he did.

Shou is the leader of the Magajin. In reality, he is the estranged father of Hitto Tamaga and the brother-in-law of Koutarou. Shou used to be a good man whose well-trusted by Koutarou. However, after their beloved woman died from a mysterious illness; Shou was driven to madness and joined the Evil Deity Organization. He quickly rose through the ranks with his knowledge of forbidden technology. He even made his own son, Hitto, as the first vessel of the Evil Deity.

Shou fought only one battle and that was against his own son, Hitto. Shou only fought Hitto in order to trigger the boy's full power as the Perfect Descendant of the Evil Deity. However, Hitto was able to overcome the influence of the Evil Deity and Shou was defeated. 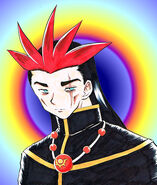 Ritsuki (DFK) and Shou, Father's Day image
Add a photo to this gallery

Retrieved from "https://bdaman.fandom.com/wiki/Tycoon_Shou?oldid=40731"
Community content is available under CC-BY-SA unless otherwise noted.