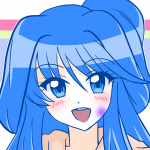 Rinne seems to be a little taller than Riki. She has a long Cobalt Blue hair that reaches pass her knees and at the middle of her hair is changing to midnight blue until the end. She ties her hair into a large and wide ponytail with white headband and she dyed black at the tips of the end of her hair.

She has a ruby red eyes and pale skin. She wears light grey sleeveless dress over darker colored shirt that is bare-shoulder and frilled. Rinne also wears black belt with a black little bag hanging at the right of it, black fingerless gloves, a pair of light grey colored boots with the cuffs are frilled and black leggings.

Rinne appears to be very cheerful, polite, often smiles and friendly. She's natural sings. She cares her family than anything else, she usually get along very well with her siblings, in younger years she was timid and inertia. She also helpful too but actually there's another personality within her. (See in Rin Shirotama)

Rinne is the youngest daughter of Ryan Shiromi and Raine Kuromi. She was born separately, she's born in Western City. 6 years ago, she was buying a present for her mother but suddenly out of nowhere she was kidnapped by a unknown "Gang". She was kept in a place with others kidnapped children. She was experienced of the horrible scenes that she saw and that is the born of her new personality and she lost of her most of her emotions the only left is anger. (There's more in Rin Shirotama)

Retrieved from "https://bdaman.fandom.com/wiki/User:LittleDragon_Yumegami?oldid=48378"
Community content is available under CC-BY-SA unless otherwise noted.