Blast Arm is a Version-Up Part introduced in the B-Daman Fireblast toyline. It is released in Japan on February 23, 2013, and sells for 787円.

Just as the Version-Up Part - Canon Arm increases Drive=Garuburn's firing strength, the Blast Arm is designed to enhance the B-Daman's Rapid Fire capabilities, while giving Garuburn Blast Mail armor pieces to give it a knight-like appearance.

If bent too hard from not using it correctly, the Blast Arm may break due to weak plastic.

Blast Arm from the rear 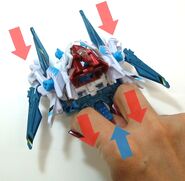 How to do the part's Emblem Charge

When the Emblem Charge is performed...

The Blast Arm's first appearance in the anime

Blast Drive=Garuburn
Add a photo to this gallery
Retrieved from "https://bdaman.fandom.com/wiki/Version-Up_Part_-_Blast_Arm?oldid=36238"
Community content is available under CC-BY-SA unless otherwise noted.